In this project we completly overhauled the roof at Cuddington Golf Club in Banstead, Surrey 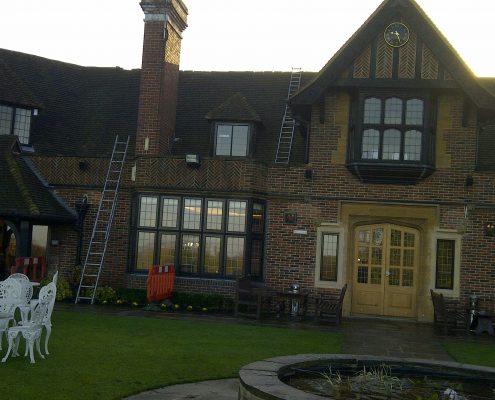 Our company was employed by the golf club to go over their roof to replace re-point some defective roof tiles, that was about 20-30 visible tiles around the golf club house. only what was supposed to be some minor repairs.

On initial inspection and gaining good ladder access to the top section of the roof to our amazement and surprise there were so many defects to the rear section with lots of missing and broken roof tiles, that we had to get the club directors up onto the roof to show them the extent of the damage.It was apparent this section had not been maintained from when the club was formed in the 1930’s.

The golf club immediately arranged a committee meeting the next day, and we were given a works order to strip out this section and renew/relay the existing roof tiles. Also in order to keep the building in character we had to be very careful in removing the original Hand Made Clay ridge tiles, and on removing 100, our men only broke 1 ridge tile, which is a very rare event, this now will enable to keep the roof looking original, but now weather tight, as they had a very large leak into the Snooker room, that brought the ceiling down.

Our company started work the very next day after the works order, as we are now in winter time, and trying to avoid the overnight frost, that could possibly affect the work. Cuddington Golf Club expressed their gratitude in our very prompt response to rectify the problems, and paid the very next day, after our completion of works.

The moral from this story, is don’t leave problems, until the last minute, as in this case they were very lucky that the roof structure under the tiles, was not to badly affected by the long standing water ingress, but they do need a new ceiling in the Snooker Room.